Continual advances in LED technology has meant that they are now beginning to be used in a variety of applications once dominated by conventional light sources.

What are the factors that are propelling the move to LEDS? The answer is a number of key characteristics listed below:

When designing an optical system, such as an illuminator, the characteristics of the particular LED / LED chip must be taken into account.

Optical design programs such as Zemax allow the real characteristics of the LED source to be directly input into the simulation model. In general this is possible because the LED photometric and ray output data is well characterised and/or is available as a data file.

In this way any anomalies such as differences between far field and near field LED radiation patterns are automatically taken into account. In imaging systems it is generally useful to avoid having the final image near a non-uniform illumination plane. This might correspond to the non-uniform image plane (source illumination plane) back down the system. Like all other sources LED radiation is governed by fundamental optical laws namely the optical invariant.

Essentially the optical invariant states that the luminance of an image cannot exceed the luminance of the object (c.f.source). Part of the benefits of using a powerful modelling tool such as Zemax is that it helps avoid impossible optical solutions. Otherwise for example, one might try to image/combine two sources with the aim of achieving a luminance higher than the individual source luminance at a common image point.

LED colour bandwidth is certainly narrow but not truly monochromatic. Typical bandwidth is 50 nm. LED Photometric brightness is influenced by the eye in that peak visual sensitivity is around 580 nm (green).

When light from all parts of the visible spectrum is superimposed, the additive mixture of colours appears white. Primary colours (red, green, and blue), when combined, also appear white. To achieve a desired white point with combined LEDS needs careful optical and electronic driver design to control the colour mix.

Manufacturing tolerances in LED bandwidth and intensity need also to be taken into account. As mentioned, white light LEDS when available, reduce these combining difficulties but still present design challenges in terms of achieving a particular white point and other photometric parameters.

Luminous power (or Luminous flux) of a source is defined in LUMENS. The lumen is the fundamental unit in photometry and all other units are derived from it and in terms of areas, distances and solid angles. A 1cm square, black body radiator at a temperature of 2042K emits 60 lumens per steradian (unit solid angle). Common photometric definitions are:

Luminous Intensity is much greater for high brightness types. This is generally given in a data sheet as the intensity along a defined axis.

LUMILEDS LUXEON STAR DELIVERING UP TO 120 LUMENS! Courtesy of LUMILEDS™.

Overview of Plastic Optics and Luminaires 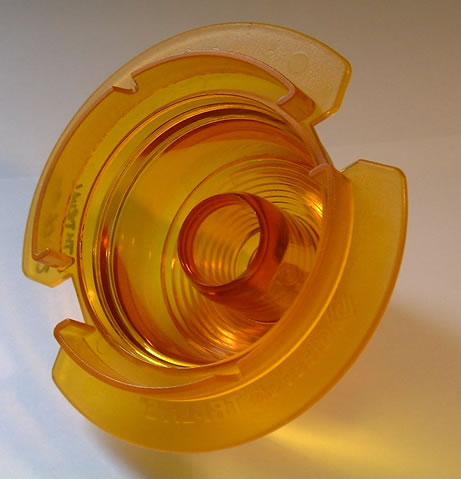 Plastic optics offer several benefits over glass elements. Versatility is a major advantage. Plastic is also inherently light and can be made in thin sections and stepped shapes, such as fresnel surfaces, which reduce weight even more, without sacrificing optical performance. Complex “wrap around” lighting optics cannot be easily made in glass. Because plastic optics can be mass produced by moulding, without the need for surface polishing, costs are considerably less than for glass optics.

When an application involves use of radiation outside the visible spectrum, (e.g. infrared radiation), the choice of glass is excluded or limited by extreme cost. Plastic materials such as T.P.X. and polyethylene allow the moulding of fresnel-type optics, which have good transmission at these wavelengths. Since the surface shape of a moulded element is determined by the cavity shape, complex profiles such as aspherics can be made. Although large diameter, aspheric lenses can be moulded in plastic, lenses under 25mm diameter can be moulded to the highest quality.

In some applications, when optics are externally accessible, the possibility of hazardous breakage of glass is a safety issue that can be avoided by using of plastic. Plastic optics can be pigmented to provide colours for indicator lights (red/green warning lights) or for simply blending-in an optic within its surroundings.

On the microscoping scale, microlenses can be produced having diameters of 0.05mm or less and focal lengths of 0.1mm. We can advice on the use of microlens arrays and have design experience of other microstructures such as prismatic, linear, cylindrical and reflective types.

Injection moulding of plastics involves a number of technical considerations of which choice of material is a primary factor. For visible operation Acrylic and polycarbonate are favoured. Acrylic is the hardest, clearest and most scratch resistant plastic. Its refractive index of 1.491 matches that of the most commonly used optical glass. It has low shrinkage and is very resistant to U.V. degradation. Its main disadvantages are high moisture absorbtion and low continuous service temperature (80 deg.C). Polycarbonate has a refractive index of 1.586, high impact strength and a working temperature of 110 deg.C. It is less desirable than Acrylic because it scratches easily and is slightly less transparent. 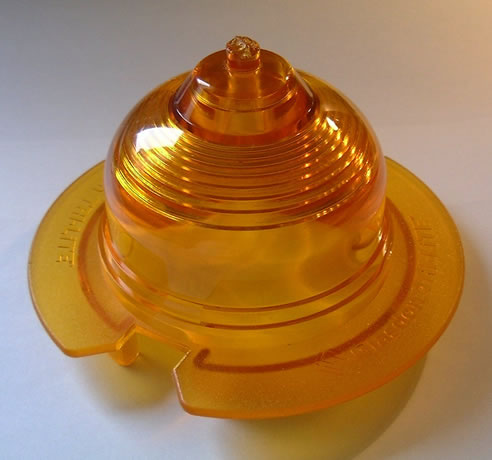 The Successful moulding of complex shapes depends on a number of factors which need consideration at the design stage. Firstly, “wrap around” shapes should have no re-entrant surfaces otherwise damage will occur during the moulding cycle as the insert is pulled away from the cavity. The number of facets should be minimised so that the surface profile is as continuous as possible. Maximum to minimum wall thickness should vary by no more than 40%. This condition ensures that material flows uniformly through the component and that material depressions on cooling are minimised. Where possible, designs should aim to be reasonably symmetric thus ensuring balanced flow paths from the feed-point. Large plane areas within a complex optic should be avoided if possible, or replaced with slightly curved surfaces. This is because good quality, blemish-free plane surfaces are harder to mould.

Since cycle time affects mould unit costs most, use of multiple cavities results in lower component price, however, tooling costs increase in relation to the number of cavities so the ultimate decision on tooling must be based on the total mould quantities (or mould rate needed).

For simple lenses, a number of testing techniques are available including focimeters for verifying focal length and interferometers for checking spherical surface form and power. Null lenses combined with interferometrs can also be used to test aspheric lenses. For many complex lenses, functional testing will be the best verification method. In road beacon optics, for example, functionality tests might measure the illumination level and cone angle for given conditions (i.e. calibrated sensor and source, fixed beacon orientation and measurement distance).

Luminaires as specified in BS4533 refer to a complete lighting unit, but here we refer only to the optics part. In lighting applications, a luminaire is normally specified in terms of its rated Lumen output and it photometric distribution. For battery operated emergency lights, BS standards require defined levels of photometric performance to be met at:

Essentially a luminaire is a device for converting a source of luminous flux (emitted into a defined solid angle) into a specified illumination in lux (lumens per square metre) over a specified area. With incandescent light sources, the optic is designed to direct rays from the active filament to illuminate the specified areas.

When “wrap around” fresnel-type optics are used, one important optical task is ensuring that there are no dead spots in the illumination. It should be noted that at intermediate points close to lens, the light uniformity may not be the same as that in the far field. This is because different points of the lens come in to view or are shadowed at different points away from the lens. In the extreme case, at a point in contact with the optic, the source will be “seen” though only a small section of optic, so at intermediate points where the illuminating rays are not mixed , hot spots or dead spots may occur. To ensure uniform far field illumination, neighbouring facets can be designed to provide a degree illumination overlap at the far field. Examples of designs we have undertaken (to B.S. standards) are shown above.